RLAB Servers are up and working for the rest of the Christmas and New Year break. On Friday 19th December the servers were shutdown for essential hardware and software maintenance.
Posted by Anita Bardhan-Roy at 23:02 No comments:

The RLAB servers will be down on 21st December from 10 a.m. until 5 p.m. They will then be up and working for the rest of the Christmas and New Year break. The shutdown is needed to perform essential hardware and software maintenance.

This will effect all services we provide, and will seriously restrict what your computers can do.

I hope the majority of you will be off enjoying you vacation but for those of you who will be working that day please come and see me or the team for advice on what you will be able to do and how you will work.

I apologise for any inconvenience this may cause you.

Nic
Posted by Anita Bardhan-Roy at 12:24 No comments:

New email quotas have been set for LSE students and staff:


This is an increase of over double the previous limits.
Posted by Anita Bardhan-Roy at 16:10 No comments:

You may download the entire ArcGIS 9.1 Documentation Library as a single zip file (328 MB in size), from the RLAB IT ArcGIS Documentation page.

Alternatively you may find it easier to browse and search the Documentation Library online at
http://edn.esri.com/index.cfm?fa=doclibrary.gateway
Posted by Anita Bardhan-Roy at 15:54 No comments:

Stata 10 is now live. Please note that due to a change in the structure of the .dta files, and a licencing issue with the new version of Stata Transfer, if you wish to open these in an older version of Stata please do one of the following

1. Use the version command.
If you use this command as standard there won't be a problem of saving to an older version.

Nic Warner Writes:
We are upgrading our Stata to version 10 and to do this I need to restart the server it is held on. I am going to do this tomorrow morning (Friday 7th Sept.) between 8:30 and 9:00.

Please make sure you quit out of Stata when you leave tonight or it will crash and any data not saved will be lost when I restart the server.

Thanks, and enjoy Stata 10.
Posted by Anita Bardhan-Roy at 16:18 No comments:

I’m emailing as I finally figured out a solution to a problem I was having with a dataset, and I thought I’d tell you in case people have the same problem in the future, and I felt like I was banging my head against a brick wall trying to figure it out.

The problem I had was that someone at the DfES messed up a .txt dataset that I was trying to insheet into Stata; instead of the rows being separated by carriage returns, they were separated by tabs (columns were separated by commas) and Stata didn’t like this, as it read it in as a single row. I couldn’t rectify the problem with a “replace all” type command in any word editors as the programs couldn’t load the dataset fully (it about 85 MB, with all the data on a single line). Stat-transfer wouldn’t work either

I finally figured out that I could use the commands hexdump (hexadecimal dump – means nothing to me!) and filefilter from within Stata to alter the dataset before it is opened. It’s so simple, but it worked perfectly for my problem. I’ve attached the relevant bit of my log file for you to see how it works – it just let me replace all tabs with carriage returns, changing the dataset from being 1 line with 87,302,806 characters to 595,377 lines with something like 30 columns. Perfect.

So now I’ve figured it out in Stata, would there have been a better way? Is there a UNIX version of Stat-transfer? Also, is there a command line in the UNIX editor bit (not sure what it’s called) that I could have used to have done the same thing. Irrelevant for this task, but I’d like to know for future reference.

There are two possible alternatives, but I'm not sure they are an improvement on what you've done. The first method (which I usually use) is to do a find and replace on UNIX...

The other quick and dirty way is to infile into excel first where you can specify your delimiter, and then stat-transfer, but this obviously only works for the smaller datasets because of excel's size limits.

Posted by Anita Bardhan-Roy at 10:26 No comments:

From today, 1st August 2007, for testing during August I am setting the main printers to print in EconoMode as standard. This means all printing will use less toner printing out in dark grey as apposed to black. If you need to print out a document that requires the text to be black follow the instructions below.

When the print window comes up select the “properties” button next to the printer.
In the properties window select the “Paper/Quality” tab
Untick the EconoMode option. (See picture below)
Click OK, then print out you document.
If you have any problems with this please come and see us. 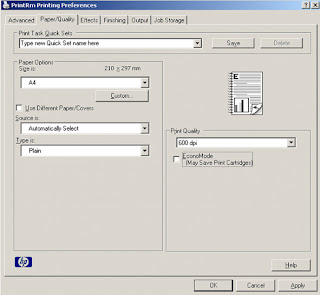 Welcome to the RLAB IT Blog

The RLAB-IT Blog will provide useful tips and IT news updates for all RLAB users.
Posted by Anita Bardhan-Roy at 12:30 No comments: